This section of the website aims to give an overview of the principal reasons why St Ives should be considered one of the foremost art colonies in the world - even before the advent of the modernist artists in 1939.  With Tate St Ives declining to feature early St Ives art at all and with modernist art historians often disparaging the representational art produced in St Ives, this is a story that is shockingly little known, albeit it can be demonstrated that the St Ives colony pre-1914 had an extraordinary international reputation and influence.  This was largely due to the unique Schools of Landscape and Marine Painting that had been established in the colony, which led it to be referred to on the international stage as 'the Mecca of the seascapist'.  These Schools, which were unique in their concentration on landscape and marine painting out of doors, not only attracted many talented students from other Art Schools all around the country, thus providing a constant influx of new blood, but also drew artists from around the world.  Accordingly, there are many American, Canadian, Australian, New Zealand and European artists who enjoyed career-influencing experiences during their stays in the colony.

I am starting work on this section in January 2019 and it will take me some months to complete.  Below are some of the subjects that I will expand upon in due course but, if there is no link shown on that subject, then that piece has not yet been completed.  Bear with me, therefore, and check back from time to time.

These pieces will merely be summaries of what I set out in more detail in my books, but I am very keen to get a heightened awareness of the achievements of the St Ives colony and of the many artists, both British and foreign, who were inspired by it, in the hope that, one day, the attitude of the powers that be in St Ives can be changed so that this extraordinary history is celebrated not marginalized. 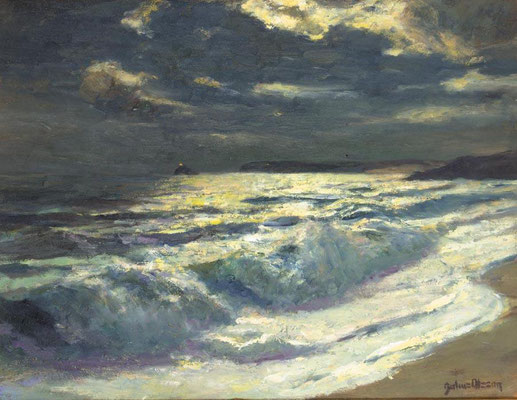 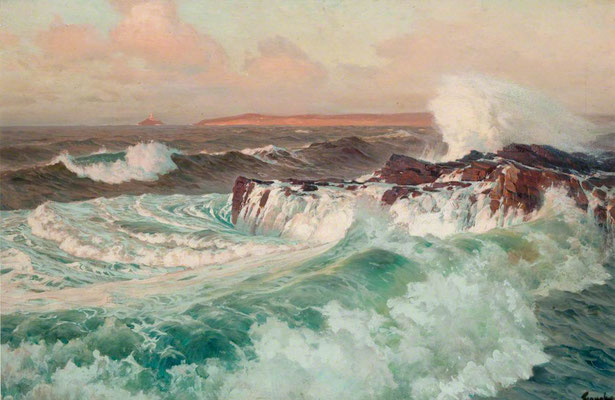 Prior to my own histories of the colony, very little research had been done into Pre-Colony St Ives Art, with the result that certain myths have arisen about the early history of the colony, which have now been repeated so often that they have acquired a veracity that is proving difficult to displace.  In particular, the visits of J.M.W.Turner in 1811 and James McNeill Whistler in 1884 have been given an importance in a St Ives context that they do not warrant.  Yes, they are well-known artists of great repute who did visit St Ives, but even a cursory analysis would have revealed that they had little impact on the development of St Ives as an art centre.

Turner's engravings of the Cornish coast for the Picturesque Views of the South-West series produced by the Cook brothers and his subsequent watercolour and oil representations of such scenes undoubtedly had a dramatic impact in raising awareness of Cornwall as an artistic destination.  However, whilst he did do several drawings of St Ives, these were never made into engravings or paintings and so were completely unknown to the outside world.  Therefore, to claim that Turner had any impact at all in artists specifically seeking out St Ives is nonsense.

In a number of 20th century books on St Ives art, Whistler is described as the artist who discovered St Ives or as the founder of the St Ives art colony.  As can be determined from the sections on the formation of the colony below, this is also a complete nonsense. Whistler was merely one of a number of visitors to St Ives in the early 1880s and the significance and impact of his unusual and, dare I say it, rather disappointing St Ives works has also been dramatically overstated.

Whistler spent January 1884 in St Ives, with his pupils Walter Sickert and Mortimer Menpes - a visit that is well documented, particularly in the writings of Menpes.  In addition to some watercolours, Whistler painted principally in oils on small grey-tinted panels and his subjects were not the normal subjects loved by the narrative painters of the day.  Instead, he concentrated on tonal effects, often depicting just beach, sea and sky or close-ups of shop-fronts.  Some dozen of these works were among the sixty-seven paintings that he included in an exhibition at Dowdeswells, New Bond Street, in May 1884 entitled Notes - Harmonies - Nocturnes.  Whilst quite rightly, this exhibition is now considered of great significance in the history of art presentation, it was not a success either critically or commercially at the time and very little comment was made about his St Ives work.  In fact, St Ives is not mentioned at all in the catalogue or in the reviews, there merely being the occasional comment, often derogatory, about his 'Cornish pieces'.  There is nothing to suggest, therefore, that his St Ives works led to a flock of artists coming down to St Ives and if one does analyse the artists who did form the initial St Ives colony, they were all in Brittany at the time of Whistler's show and, accordingly, would not have seen it.

This section looks at the artists who worked in St Ives prior to the formation of the colony in the winter of 1885, including J.M.W Turner, Edward William Cooke, James Clarke Hook, George Wolfe, Samuel Phillips Jackson, John Brett, the Americans William Trost Richards and George Boughton, the Germans Theodor Weber and Otto Scholderer, Edwin Ellis, Alberto Ludovici Jnr, James Whistler and William Bartlett.

The Dawn of the Colony

This section looks at how St Ives was discovered by a group of multi-national artists that had been working together in Brittany, particularly in Concarneau, and how their successes at the Paris Salon gave the colony its international reputation from the outset.  Artists featured include the Frenchman, Emile Vernier, the Americans Edward Simmons, Frank Chadwick, Howard Russell Butler, Charles Reinhart and Rosalie Gill, the Finn Helene Schjerfbeck, the Swedes Anders Zorn and Emma Lowstadt Chadwick, the Canadian Elizabeth Armstrong, the Australians Louis and Wyly Grier, as well as British artists Maria Dorothea Webb, Henry Harewood Robinson, William Eadie, Stanhope Forbes and William Titcomb.

This is the term that I have used to describe the novel approach to landscape and marine painting introduced into St Ives by Adrian Scott Stokes in the late 1880s and which was prevalent into the new century. It owed a debt to the Barbizon School but was also a reaction against the Romantic and Pre-Raphaelite approaches to landscape painting.

The link will take you to my chapter on this subject in my book, Pioneers of St Ives Art at Home and Abroad (1889-1914), which has the sub-headings

Rejection of the Pre-Raphaelite landscape style

The impact of the Aesthetic Movement

‘The School of Moonrises’

Marine painting and "the inherent poetry of the sea"

The influence of Whistler

Painting out of doors - new developments

St Ives Tonalism in a national and international context

This section looks at the works of some of the leading British landscape painters from the St Ives colony, including Adrian Stokes, Arnesby Brown, Algernon Talmage, Arthur Meade, John Noble Barlow and Fred Milner.

This section looks at the works of some of the leading British marine painters from St Ives, including Julius Olsson, Adrian Stokes, Arnesby Brown, Arthur Meade, Moffat Lindner, and Louis Sargent.

The St Ives Schools of Landscape and Marine Painting

The link is to the chapter on this subject in my book, Pioneers of St Ives Art at Home and Abroad (1889-1914), which contains the sub-sections

The classes of Adrian Stokes

‘A Cornish School of Landscape and Sea Painting‘ - Olsson and Talmage

‘The St Ives School of Art (Marine and Landscape)’ - Grier

The classes of John Noble Barlow

‘A Cornish School of Landscape and Sea Painting‘ - Talmage

More detailed accounts of the life of the students at such schools is contained in my Social History.  See also my newsletter The Siren Issue 3.

Whilst St Ives became best known as a centre for marine and landscape painting, it was also, like Newlyn, a thriving fishing port, and, accordingly, attracted a number of figure painters, who depicted not only the fisherfolk at work, at prayer and at rest, but also other locals going about their lives.  Once again, due to the neglect of St Ives representational art, these important paintings, which now have enormous social historical significance, are little known and under-appreciated.  Artists featured include William Titcomb, Dorothy Webb Robinson, Frederick Sargent, Edward King, William Fortescue etc.