St Ives - The Dawn of the Colony

This section looks at how St Ives was discovered by a group of multi-national artists that had been working together in Brittany, particularly in Concarneau, and how their successes at the Paris Salon gave the colony its international reputation from the outset. 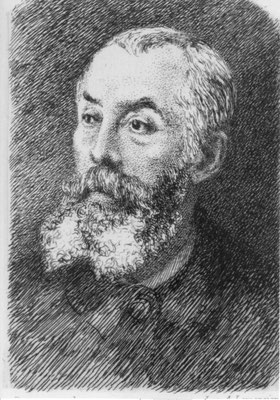 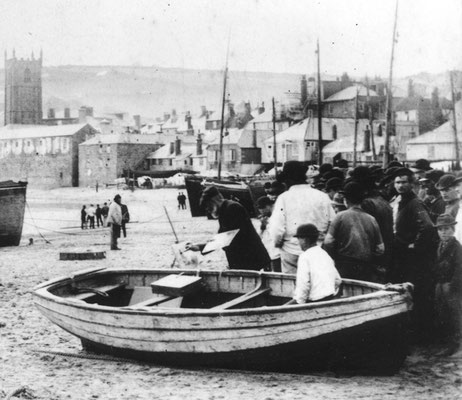 The American artist, Howard Russell Butler, in a letter home in August 1887, described the French artist, Émile Vernier (1829-1887), as the person "who was really the discoverer of St Ives". Certainly, Vernier painted extensively in St Ives in the mid-1880s, for a catalogue of a sale of Vernier’s paintings held at the Hotel Drouot in Paris on 9th February 1886 lists more than forty St Ives subjects.  It is unclear precisely when Vernier first visited St Ives.  He worked in London in 1882, but he did show two Cornish paintings at the Paris Salon in 1885, and, as one of these was entitled Grande Marée d’Octobre, en Cornwall, this indicates that he was in Cornwall at least by October 1884. The Hotel Drouot catalogue supports the view that he will have come to St Ives on this occasion, and that the scene will have been in the St Ives locality, as there are no other Cornish towns, apart from Hayle, depicted in the works included in that sale.  Vernier also painted regularly in Concarneau at this time and so it is likely that the group of artists that came from Concarneau to St Ives in 1886-7 will have first heard of its attractions from talking to Vernier and/or seeing his depiction of its charms, which is why Butler credited him with the town's discovery.  Frustratingly, few of Vernier's depictions of St Ives have surfaced.  However, there is one at Musée Arras. 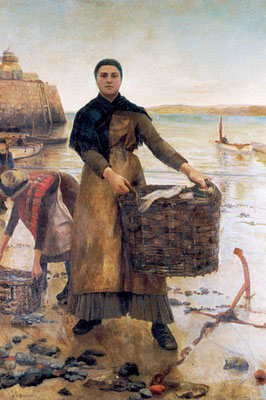 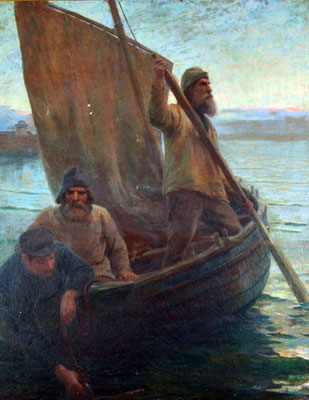 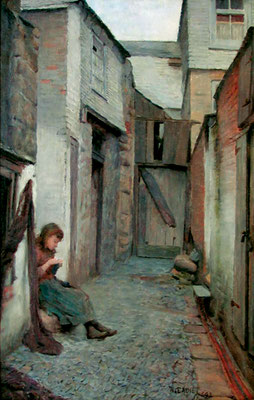 The St Ives colony is deemed to have been established in the winter of 1885, as this was the first occasion when artists over-wintered in the town, and those artists - Yorkshireman, Henry Harwood Robinson, his Irish fiancée, Dorothy Webb and Scot, William Eadie, all went on to live in the town for several decades.  Robinson had limited success as an artist but was a key figure in the community, being Secretary of the Arts Club for many years, a leading light in the St Ives Choral Society and a J.P.  His wife was one of the leading female artists, having regular success at the Royal Academy in the 1890s, whilst William Eadie produced genre scenes and won commissions for many local portraits. 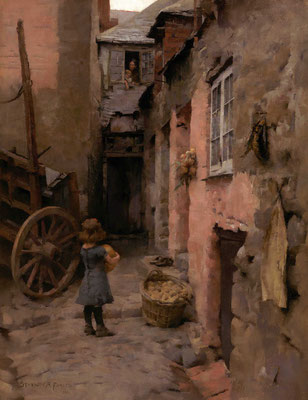 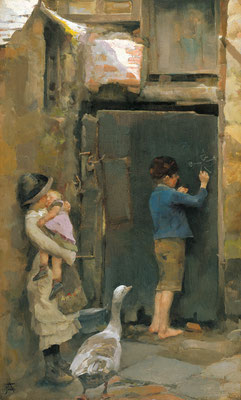 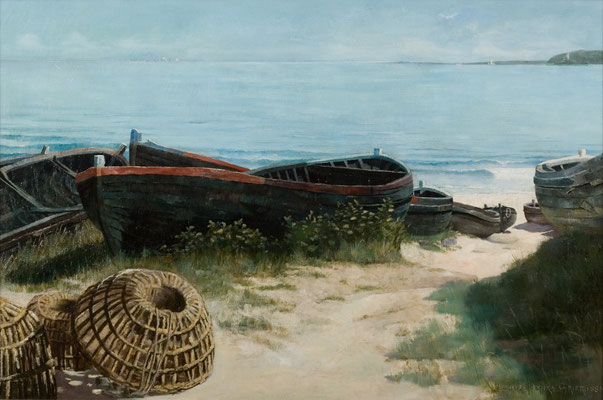 Howard Russell Butler indicated that at one dinner in the late spring of 1886 of 'The Ramblers', a dining club composed of English speaking artists in Paris, "the question came up regarding the best place for summer work. It was agreed that the guests present should start out in different directions and visit the coast towns of France, Belgium, Holland and England and that on their return they should compare notes." Fellow American, Edward Simmons, who had been the leading artist in Concarneau since 1880, decided to visit Harry Robinson, a former Concarneau colleague, in St Ives, and Butler, who had checked out the coast of Normandy and Holland, commented that "the photographs that he brought back and his enthusiastic descriptions led me to decide against Honfleur and in favor of St Ives." Their party that summer comprised Simmons, his Californian artist wife, Vesta Schallenberg, his Harvard friend, Frank Chadwick and his Swedish wife, Emma Lowstadt, and Butler.  In St Ives, they met Stanhope Forbes and his Canadian fiancée, Elizabeth Armstrong and her American friend, Rosalie Gill.  The Australian born, Louis Grier, was in town that year as well - he had first visited in 1884 - as was J. Langton Barnard and his artist wife, Kate, and Ellis Wilkinson, father of distinguished marine painter Norrman Wilkinson.  Right from the outset, therefore, the St Ives colony was an international community.  Although Butler left in October, the others stayed until March 1887.  Whilst Forbes exhibited his principal St Ives work, Their Ever-Shifting Home, a painting of gypsies now owned by the Art Gallery of New South Wales, Sydney, at the Royal Academy in 1887, most of the Paris/Concerneau contingent showed their paintings at the Paris Salon, with Emma Chadwick winning an Honourable Mention for Five O'clock, a painting of three old dames taking tea in a small St Ives cottage, and Butler winning a mention for Moonrise, St Ives.  Whilst his major St Ives paintings have not been traced, the New York Arts Club owns Butler's Gone - On A St Ives Beach dating from 1886. 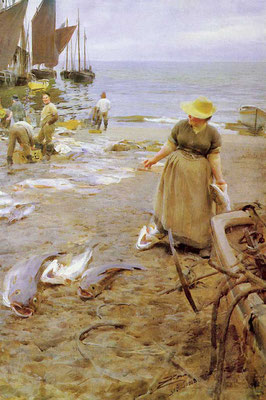 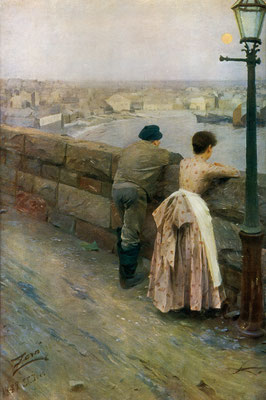 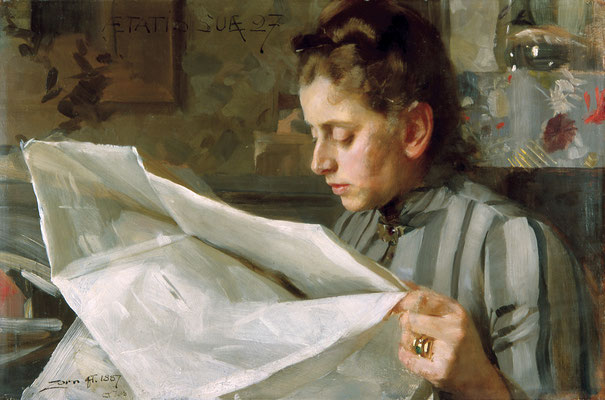 In 1887, the Simmons party returned again, but were joined by the American illustrator and artist, Charles Reinhart, and the English landscape painter, Adrian Stokes, who had shared a studio with Simmons in Concarneau, and his Austrian wife, Marianne Preindlsberger, and her Finnish friend, Helene Schjerfbeck.  Butler mentions that the colony that year also included a Norwegian (Bernt Gronvold), a German, a Greek and a Russian.  Later in the year, the Swede Anders Zorn arrived and became great friends with Simmons, who encouraged him to paint in oils.  Zorn produced a stunning series of oils and watercolours of the town, many of which are now held by the Zorn Museum in Mora.  Highlights are the watercolour Fish Sale, St Ives, which was hung at the Grosvenor Gallery, and the oil Fisherman, St Ives, which won an Honourable Mention at the Paris Salon in 1888 and was bought by the French Government.  It was originally hung in the Luxembourg Museum in Paris, where it encouraged many other artists to come to St Ives.  It is now in Musée Pau. 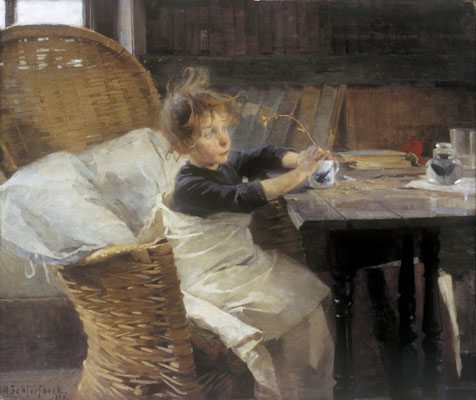 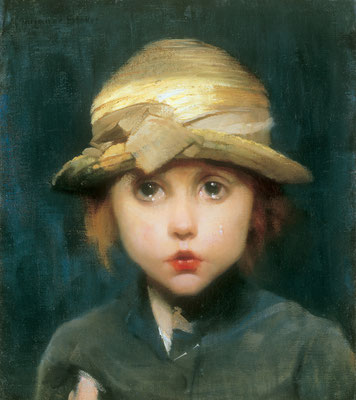 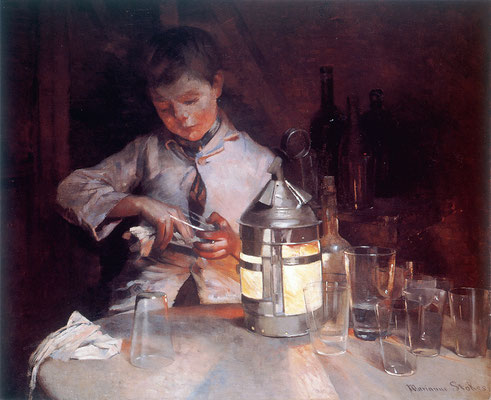 As Helene Schjerfbeck could not speak English very well, she often worked alongside Marianne Stokes, and a child that they painted together a number of times was so naughty at school that the teacher was only too glad when she sat for the artists!  This girl featured not only in Marianne Stokes' The Tearful Child, but also in Schjerfbeck's seminal painting, The Convalescent, which was entitled Premiere Verdure (The First Greening), when it was first exhibited at the Paris Salon in 1888 and Recovering when it was shown in Helsinki in the autumn of 1888, from which show it was bought by the Finnish Art Society.  However, it was lent to the Paris International Exhibition in 1889 under its current title, The Convalescent, where it won a first class bronze medal.

At this juncture, Marianne Stokes concentrated on interiors featuring children, in which the play of light off copper, brass and glass was a central feature.  The Walker Art Gallery have Polishing Pans (1887) and Penlee House, Penzance have Lamplight (1888). 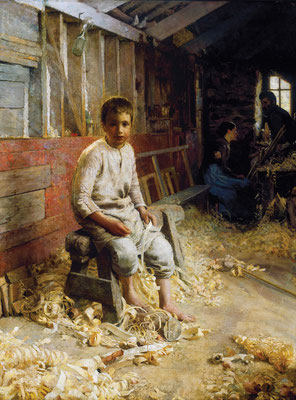 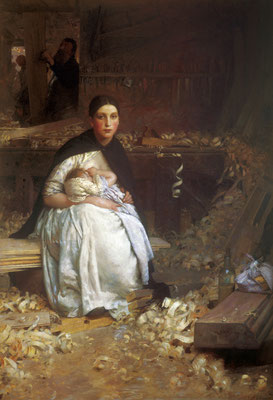 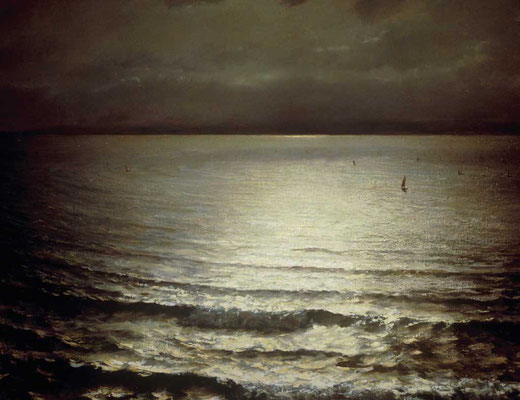 The loquacious and probably rather arrogant, American, Edward Simmons, was not everyone's cup of tea (Stanhope Forbes was not a fan) but he was a fine painter and he caused quite a stir.  In The Carpenter's Son (Paris 1888, RA 1889), he depicted his eldest son in his St Ives studio with wood-shavings scattered around, so converting the scene into a depiction of the Christ Child. The Chantrey Trustees were initially impressed  by this informal presentation of Christ and offered to buy the painting, but an article in a Scottish newspaper denouncing it as heretical made them revoke their offer, which did not impress Simmons.  Then, when the RA marked his next exhibit, John Anderson, My Jo, as sold, when it had not been, he issued a writ against them, thus garnering much publicity.

In 1889, Simmons won a medal at the Paris International Exhibition with his large nocturne of St Ives Bay, before returning to the Holy Family theme, with The Mother, depicting his wife, Vesta, and their second child, in his studio for his 1891 RA exhibit.  These works were considered controversial and The Carpenter's Son was badly vandalised even as late as the 1990s. 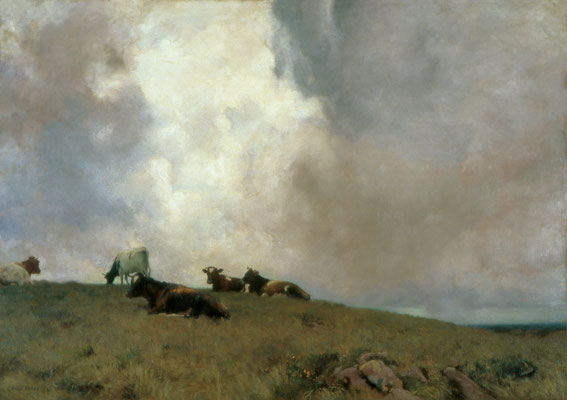 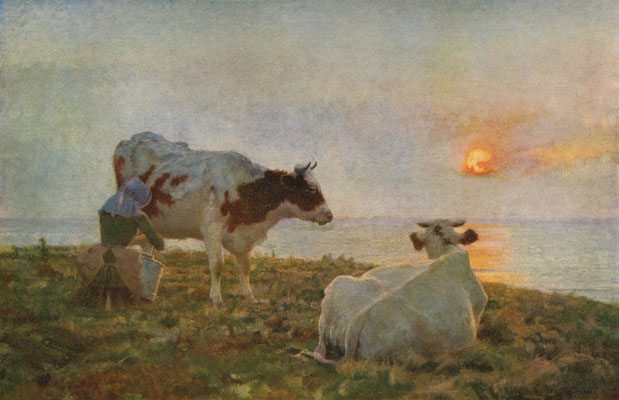 Adrian Stokes’ Upland and Sky (RA 1888, Tate Gallery) was the first painting by a St Ives artist bought by the Chantrey Trustees - the same year as they bought the first painting by a Newlyn artist - Frank Bramley's A Hopeless Dawn.  The painting was considered revolutionary - it merely concentrated on an atmospheric effect, with some seventy per cent of the canvas devoted to the sky.  In contrast to landscapes of the period, there is nothing dramatic about the scenery - nothing to inspire awe or wonder.  Some cows graze on the upland but there is no story to tell, there is no invocation of a rural idyll.  It is merely the artist presenting an attractive transient lighting effect that he has witnessed and wishes to share.   It seeks to capture and inspire a mood of restfulness.  In an article in The Artist in 1898, the painting was hailed as “a source of inspiration to lesser men, leading them to the observation of fresh aspects in nature, to new arrangement of material”.  It was indeed a ground-breaking work and a much braver choice by the Chantrey Trustees than A Hopeless Dawn.  It led to a surge of landscape artists and students coming down to St Ives to study alongside Stokes.

Stokes had a series of further successes - both landscape and marine works - over the next few years, with The Setting Sun (RA 1890), which was acquired by leading collector, George McCulloch, being rated later as the landscape of the decade.  However, it is now one of a series of St Ives paintings owned by the Harris Museum, Preston, which are unexhibitable. 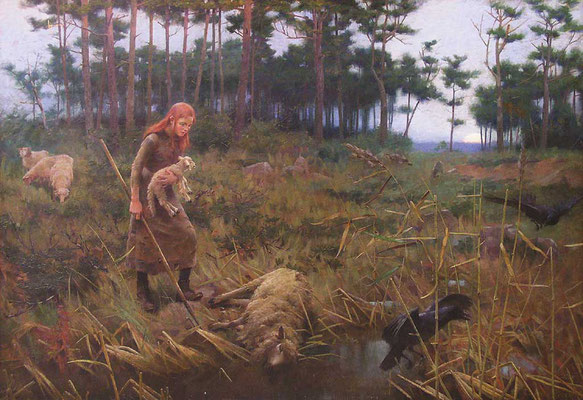 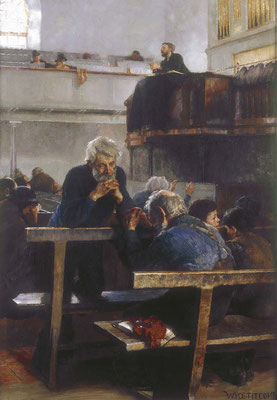 In 1889, a number of the early St Ives settlers, such as Simmons, Zorn, Butler and Schjerfbeck, won medals at the Paris International Exposition for St Ives paintings.  Then, in 1890, there were only two British artists who won medals at the Paris Salon - and they were both from St Ives.  Wyly Grier, like his brother, Louis, had been born in Australia, and his medal painting, Bereft, showing a girl discovering the dead mother of a lamb on the moors above St Ives, had been skied at the Royal Academy in 1889.  He emigrated to Canada, where he became a distinguished portrait painter and was knighted for his services to Canadian art.  William Titcomb's painting of the Primitive Methodist chapel in St Ives went on to win more medals at international exhibitions than any other Cornish painting.  He was to be the leading figure painter in St Ives until he left for Germany in 1905.